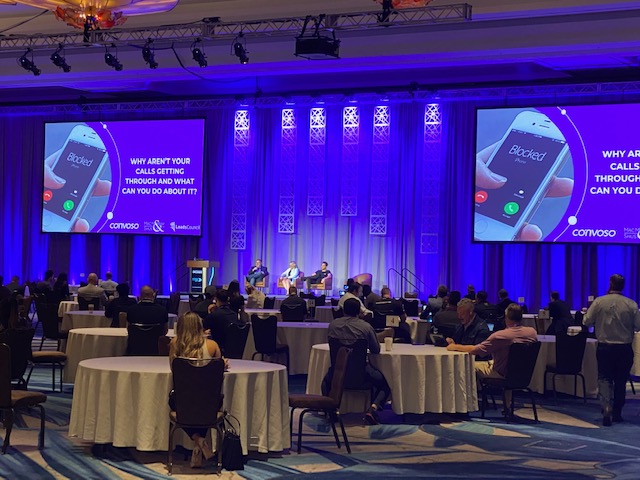 After more than 12 months, the OPTIZMO team was able to attend an in-person industry event in 2021! Lead Generation World in Orlando became the first industry event to step out of the virtual world and get people together again in the real world. We wanted to share a few things we learned from the event.

There is Just no Substitute for Face-to-Face Interactions

I don’t think too many people would argue that virtual meetings are as productive as face-to-face interactions, but heading back out to an industry event after more than a year of Zoom meetings and virtual events was still eye-opening. I knew I missed meeting people in person, but I had become so used to jumping on video conferences that I think I forgot just how much is lost when you aren’t in the same physical space with the people you are talking to.

I know I wasn’t the only one who felt this way, as you could really feel a sense of camaraderie among the few hundred people in attendance at the show. People who were meeting for the first time were more enthusiastic than usual at a conference and of course, catching up with old friends and industry partners was arguably the most valuable aspect of the entire conference.

You can certainly look forward to really enjoying seeing people in the real world again and you may find you missed it even more than you thought.

Be Adaptable with Greetings

It was interesting to watch people meet someone for the first time at the show. Back in the old days (like January 2020) we all knew how to greet someone we just met for the first time vs. a close friend who we’ve known for years. In Orlando, you could see that everyone was feeling out how to manage those first greetings. I saw the full gamut of options on display, including waves, elbow bumps, fist bumps, handshakes, and hugs.

Most people seemed to want to let the other person initiate that first greeting to set a baseline for how to interact with each other during the show. This did lead to a few awkward-looking introductions on the first evening of the event. But, as people got more comfortable with actually meeting people in person again, you saw everyone relax.

So, expect just a little awkwardness when you get to your first real-world event in 2021, But, it will likely ease up by the second day of the event.

Interacting while Wearing Masks in a Crowd is Tricky

By now we’ve all become used to wearing a face mask out in public. I don’t think anyone actually enjoys it, but we have found ways to adapt. You have also no doubt run into situations where communicating with someone when each of you is wearing a mask is less than ideal. Personally, I never realized how much I used a bit of amateur lip-reading to help figure out what someone is saying when you couldn’t quite catch the words. Similarly, facial expressions aren’t as easy to spot when a smile or frown is hidden behind a mask.

Well, you can probably imagine that when you get into a situation where there are a larger number of people in a room (even a large one) and everyone is talking, that the background noise makes it hard to hear. Anyone who has ever attended the Meet Market at Affiliate Summit can attest to how hard it can be to have a conversation with a ton of people and overlapping conversations happening. So, add masks to the situation and it can be really tricky to hear what the other person is saying.

If mask-wearing is still mandatory or customary when you attend your next in-person event, just be aware that it is likely going to be even more challenging than normal to have a conversation in a crowded room.

Having a Lot of Space is Important

Building right on that last lesson around hearing people speak, the event organizers can do a lot to help alleviate this issue by planning for a larger event space than they would have in 2019. Not only does it help with social distancing, but giving people a bit more breathing room in the exhibit hall, session rooms, and networking areas also makes it easier for people to break off into smaller groups for conversations.

This worked really well in Orlando, as the conference center didn’t have any other large events going on, so LGW attendees could easily spread out and find areas to get away from the noise of the event for more comfortable meetings and conversations.

This is also a good argument for companies having hotel suites where they can invite clients and partners to meet away from the larger groups at the event. It has always been a valuable strategy but makes even more sense in 2021.